Stained glass windows were predominant in places of worship throughout the history. The colorful panes were associated with Gothic cathedrals and can be found in plenty of religious sites, from fascinating mosques to modern churches.

Let’s take a tour of some of the most famous stained glass windows across the globe, from medieval to contemporary creations. While the splendid pieces range in scale and style, all of them have the ability to transform an earthly site into a transcendent kaleidoscope of colors.

Paris’ Sainte-Chapelle was built in the 13th century by King Louis IX. It was described as the “jewel of the Rayonnant Gothic period”. Sainte-Chapelle is particularly known for its collection of 15 windows, even though it was initially intended to host precious relics. Every window measures almost 50 feet in height and it depicts a sparkling interpretation of a biblical scene rendered in impressive detail. In addition to these vertical masterpieces, the chapel is also famed for the rich tracery and kaleidoscopic colors of its rose window.

Between the 15th and the 16th centuries, a wonderful Gothic chapel was raised in the University of Cambridge’s King’s College. King’s College Chapel is known for its treasure trove of narrative windows. It is also admired for a painting by Baroque master Peter Paul Rubens. The iconography incorporates royal, but also religious motifs. The beautiful Chapel illustrates the artistic advancements of England’s late Gothic period.

The Nasir al-Mulk Mosque is an amazing example of Islamic architecture. It is a 19th-century place of worship in Iran. It features a façade decorated with a row of ornamental stained glass windows. The “Pink Mosque” offers worshippers a sunlit spectacle every day at dawn. When the morning light shines through the panes, it illuminates the interior tiles and decorated carpet with an enchanting multitude of vivid colors. 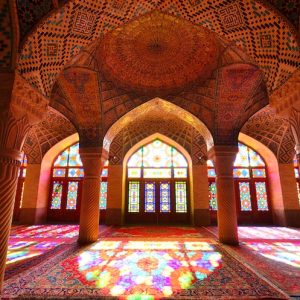